The Disputed History of the Gourmet Deli-Style Reuben Sandwich

The Reuben is cemented in American culture as one of the most satisfyingly hearty sandwiches you can find on a deli’s menu. While its current status as an American classic is irrefutable, the origin of this culinary colossus is hotly contested. According to What’s Cooking America, there are a handful of unsubstantiated narratives, but two stand out as the most likely.

The first man credited with the invention of the gourmet sandwich was a New York, New York delicatessen owner named Arnold Reuben. The story starts when Anna Selos, a theatrical actor who performed with Charlie Chaplin, walked into his shop and exclaimed “I’m so hungry I could eat a brick.” Arnold ran to the kitchen, grabbed a loaf of rye bread, cut off two generous slices and then proceeded to build a pile of meat and condiments. According to Arnold’s daughter Patricia, the original deli-style sandwich had sliced Virginia ham, roast turkey, Swiss cheese and was topped off with coleslaw and gobs of Reuben’s homemade Russian dressing. Anna loved the concoction so much she insisted it be called the Selos Special. Arnold quickly shot back “I’ll call it a Reuben Special!”

The competing origin story comes out of a poker group from Omaha, Nebraska around 1925. Reuben Kulakofsky, co-owner of the grocery wholesale company Central Market, was part of an organization of local businessmen that met weekly to play poker and also apparently had a knack for creating their own snacks. One night, Kulakofsky had the idea of pairing rye bread with corned beef, sauerkraut and Swiss cheese. The sandwich was immediately added to the menu of the poker group’s venue, the Blackstone Hotel. It stayed a local tradition until 1956, when Fern Snider won the National Sandwich Idea Contest sponsored by the National Restaurant Association with the original recipe. 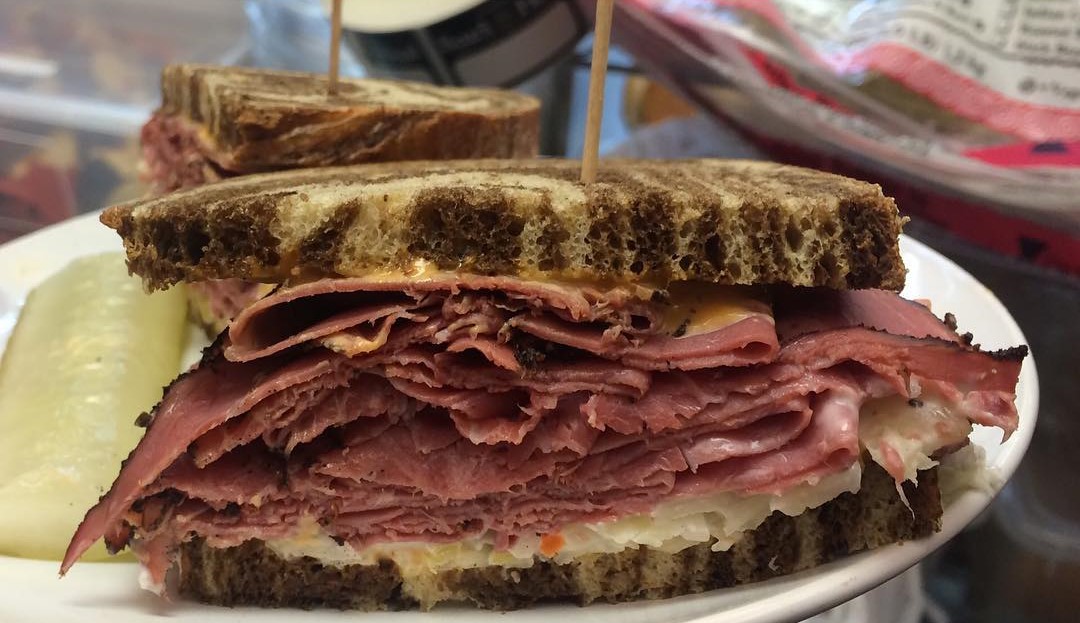 However the iconic Reuben came to be, we love it and are determined to feed Philadelphians the best tribute to this historic sandwich possible. We are proud to say that Waterfront Gourmet’s deli menu boasts the best Reuben in the state. We source the highest-quality ingredients and lovingly assemble them for each customer. Our sandwich is made out of the traditional components below:

If you’re craving a gourmet deli-style Reuben sandwich now we can help you out. Take a trip to one of our Philadelphia locations or make a delivery order online and get your hands around the best Reuben in town.

Looking for Variety in Your Meals? Sandwiches, Salads, Soups and More! Eat with Us Today!

In Philadelphia, we’re privileged to have some of the best food options available. Our city...

Order online or by phone

* Delivery within the local neighborhood – call to verify

Select a location to order online